Sleepy Somerset is host to most fashionable place in the UK

Bruton, a small town in Somerset, is now considered the most fashionable place in the UK, hosting numerous celebrities and a top art gallery, with a significant impact on local property prices.

Do you fancy getting the best Notting Hill lifestyle, dining at fine restaurants and celebrity spotting in the streets? It turns out that the quiet town of Bruton in Somerset is the best place to do this nowadays. Bruton has received a lot of high profile coverage in newspapers and even Vogue Magazine recently. Situated between Yeovil and Frome, it’s favoured by the rich and famous in for being off the beaten track, although it might strike the visitor as an unusual place to become the toast of the London high-life…

Situated near medieval Wells and close to beautiful Georgian Bath, Bruton has an ancient feel, with old stone streets and houses with stone facades that haven’t changed in centuries. Home to venerable public schools such as Kings Bruton, Sexey’s and Bruton School for Girls, as well as nearby Hazelgrove Prep School,  a 14th Century Church and a 16th Century Dovecote also add local flavour. More modern attractions include boutique shops and the delightfully trendy At The Chapel – a restaurant, hotel, bar and pizzeria all rolled into one. It is also home to the world-famous Hauser & Wirth art gallery, run by art dealers Iwan and Manuela Wirth, who stop by when not rushing between London and New York. 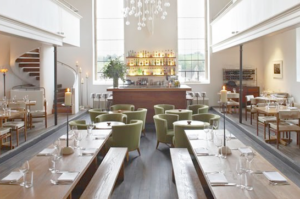 At the Chapel
Credit: www.atthechapel.co.uk

These attractions have brought the likes of Cameron Mackintosh, Rhys Ifans, Kevin McCloud and Sam Taylor-Wood to live in and around Bruton. Nicholas Cage and Stella McCartney are locals, and there are reports that the George Clooney and Johnny Depp have been spotted there in the past. All of this adds a sprinkle of star-dust to what would otherwise seem a pretty, but sleepy, Somerset town.

We think Bruton has become an ideal place for those looking for a change from London, but want to retain some urban coolness – some locals have even nick-named it ‘Notting-on-Brue’.

This influx of celebrities and Londoners has had a noticeable effect on the house prices in Bruton and the surrounding area. Zoopla has estimated that the prices have risen by 6% in the last year alone. Castle Cary, the nearest town with a direct rail link to London, has had house prices rise by 8% in the last year. This can be compared with the Frank Knight figures suggesting that property prices in the region have grown by a meagre 5.6% since 2009.

According to Frank Knight, the reason for Bruton and the surrounding area’s significant growth is a ‘ripple effect’ as Londoners sell up and move to the trendy parts of the South West. Bruton, named recently as winner of The Times Top 30 most fashionable places to live, represents a key focus point of those looking to capture some of that clean country air and rural living. This has become possible because of the increasing divide between urban property prices and rural ones. Property prices in the South West are still 16% below their previous market peak. Meanwhile London properties are valued at 32% above their previous market peak. This is enabling Londoners to look to the South West, and follow celebrities in rural property investment.

It seems that this trend will continue into the future. With good schools on offer, interesting people and a beautiful local environment, Bruton property prices are only likely to go up. The high level of national press coverage that Bruton receives is likely to drive a further influx of Londoners who fancy trying out the latest celebrity country trend. Whatever the case, star-spotters may find Somerset more profitable than London for the moment.

Back to news
← Bristol and Bath – the places to be in the future?
‘Devolution Revolution’ meets with mixed reactions in the South West →